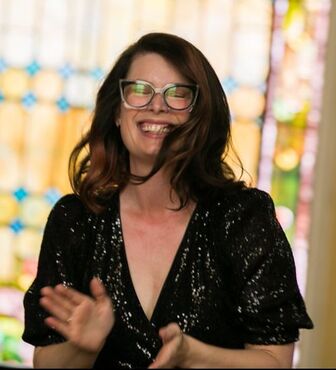 Heidi is also the director of the American Military Spouses Choir, a component of the Center for American Military Music Opportunities (CAMMO) based in Washington D.C. In February 2020, she finished seven years of active duty service singing with The United States Army Field Band Soldiers' Chorus. As an enlisted conductor of the Soldiers' Chorus, she conducted concerts across the country and Puerto Rico. As a soloist, she graced the stages of Carnegie Hall with the New York Pops, Severance Hall with the Cleveland Pops, The Kennedy Center with the National Symphony Orchestra, and The Henry Ford with the Detroit Symphony Orchestra.
​
Prior to joining the Army, Ms. Ackerman was a teacher and freelance musician in Arizona. She sang three seasons with Arizona Opera and soloed with the Phoenix Symphony on Mendelssohn's Elijah. She earned a Master of Music in Vocal Performance from Arizona State University and a Bachelor of Arts in Choral Conducting and Education from Northwestern College, IA. She is currently director of choirs at North County High School in Glen Burnie, Maryland. In her spare time, Ms. Ackerman performs around the DC/Baltimore area, including a concert series she started at the Maryland Correctional Women's Facility. She lives in Baltimore, Maryland with her husband and two dogs.